Residents of Brighton & Hove were shocked to discover plans to shorten their city by 1 metre along it’s East/West axis following Brexit.

In 1972, the then Home Secretary Reginald Maudling ordered that the Sussex town of Brighton had to be lengthened by one metre due to decimalistion. 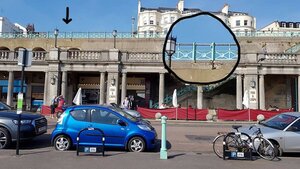 The controversial move, evidence of which can be seen in the above picture, was to bring the then sleepy seaside town into line with Dieppe on the opposite side of the English Channel allowing French workers to move more freely around the town, paving the way for the expected influx of seasonal migrant workers.

In recent weeks, and in the run up to Brexit, there have been calls to remove the extra metre following the UK’s withdrawal from the EU. Residents of the newly crowned Hipster Capital Of The World are understandably unhappy with this news.

“It goes right through my bathroom” publican Reg Thong told The Rochdale Herald. “It’s outrageous, once the extra metre has gone i won’t fit in the bath. Why can’t they take the metre off Worthing instead? They’ll never notice, they’re all senile.”

The people of Hove have also been up in arms as the removal of the additional metre would mean that the entire town would move 3 feet to the left.

A spokesperson for Brighton & Hove City Council explained that “the extra metre has given our city the room it desperately needed to grow from a small town that was only ever visited by mods and rockers on bank holiday weekends into the vibrant city we have become; the veritable smorgasbord of culture for Hipsters and pretentious, entitled millenials it is today.”

Home Secretary Amber Rudd was unsurprisingly not available for comment.

Local News June 23, 2020
We use cookies to ensure that we give you the best experience on our website. If you continue to use this site we will assume that you are happy with it. Our cookies contain no chocolate chips and are inedible.Yeah, alright!