Several dozen journalists at The Daily Mail are feared dead whilst dozens more are critically injured after laptop computers exploded in their Northcliffe House head office this morning.

The tragedy occurred when The Daily Mail’s hate powered IT system suffered a catastrophic glitch as journalist Sarah Harris wrote a story about a homophobic maths question that was issued to pupils at The Royal Grammar School in High Wycombe.

The question read “if in a town, 70% of men are married to 90% of the women (and each marriage is between one man and one woman, as God intended when he made humans male and female), what percentage of the adult population are married?” 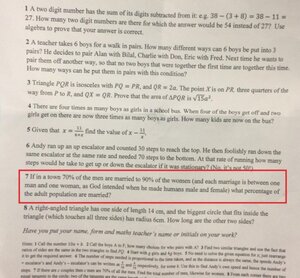 While The Daily Mail didn’t appear to land explicitly in support of either the crackpot religious loonies or the rest of humanity the lack of the word immigrant and a hateful tone caused a feedback loop in the server room and the subsequent biblical inferno.

Paul Dacre was in the office at the time but escaped unsinged after apparently walking calmly through the flames and saying something about it “not being as hot as eternal damnation.”