Less than a week has gone by since a Daily Mail editor allegedly tried to defend his decision to relegate the Olympic Gold Medallist, who happens to have alopecia, to the back cover of their dirty little rag in an interview with The Rochdale Herald.

Unbelievably they have gone and done it again, this time in their reporting of one of the UK’s highest profile murder cases.

The Daily Mail’s coverage of the horrific murder of Sadie Hartley was sensationalised by the paper this morning with a full page cover spread for the delectation of their readers.

Three of the four protagonists in this terrible human tragedy, including the victims, were featured on the cover of their paper, but guess what. There’s a fourth who didn’t make the cover. 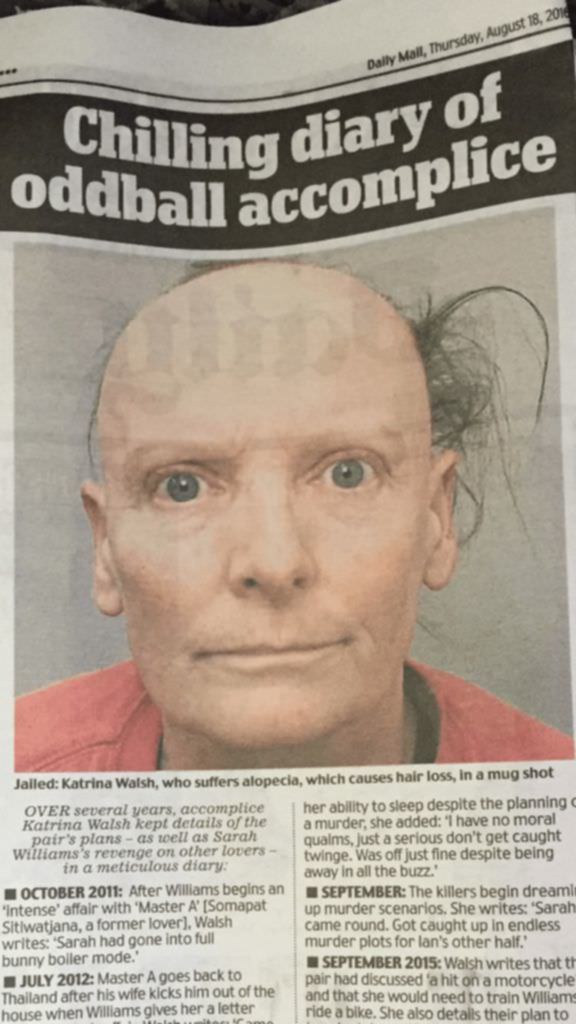 The accomplice, Katrina Walsh, who was jailed for 25 years without parole has alopecia yet the paper chose not to include her in the cover story but relegate her photo to page two. They had no qualms about putting a bald man on the cover though.

We asked who we believe is their editor what the hell they were thinking;

“We went through this last week. You can’t put a bald woman on the cover of The Daily Mail, it’ll scare off our readers.”

Are you fucking kidding me? Some people have alo-fucking-pecia they’re completely normal people, some are horrible murderers, some are incredible athletes.
We asked why they had chosen to describe her as “Katrina Walsh, who suffers alopecia, which causes hair loss” as opposed to “Katrina Walsh, probably a fucking a psychopath, which causes a lack of empathy and homicidal behaviour”.
“Well it, err, well err, you know, err, our readers, well. We have to sell papers you know. We’re a tabloid. Rothermere has a boat.”

You’re doing this to yourself Daily Mail.