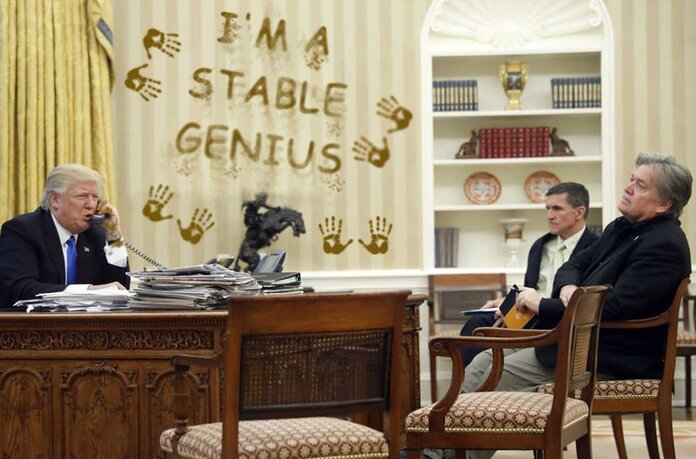 Washington – Reports are coming in today that the White House domestic staff who are responsible for cleaning the Oval Office have resigned over working conditions.

It is understood that several employees quit this morning in disgust after discovering that they were going to have to wipe a large quantity of human excrement off the wall behind the Resolute Desk, again.

Sources that are almost as reliable as those cited in Michael Wolff’s book ‘Fire and Fury; Inside The Trump White House’ told The Rochdale Herald that the words “I’m a stable genius’ were daubed in poo on the wall along with about a dozen tiny hand prints.

“We were as surprised as everybody else.” Whichever chap who is the Chief of Staff in The White House this week told The Rochdale Herald’s White House Correspondent.

“We had no idea he knew how to write either! We were aware that he likes to throw crap around which is why we had The Oval Office decorated with the same easy wipe paint they use in nurseries and mental institutions.”

“But still it was pretty shocking to see it up there, all spelled correctly and everything. Maybe those reading lessons that Sarah Huckabee has been giving him every evening are starting to pay off.”

“It’s a shame about the cleaners though. They’re really difficult to get. They were good ones too, they would tidy up, clean under the furniture, do a bit of ironing and didn’t seem to mind changing the sheets on Donald’s bed. Which is a damp ordeal I shouldn’t really tell you.”

“Now that he’s writing stuff, maybe we can get him to read something. It’s progress, in a way.”