After years of study, it has finally been confirmed by scientists from the Special Training Institute North Grimsby, that wasps serve no useful purpose and are just evil little shits.

We spoke to a representative from the institute, Ava Gotaswotit who explained the results to us.

“Basically, everything about them is trouble, they live in nests made from their own vomit and they hate everything that lives.”

“Really, they exist only to make it impossible to go near bins in summer and then try and sting everything they can. They’re basically just the angry drunk lout of the insect world.” 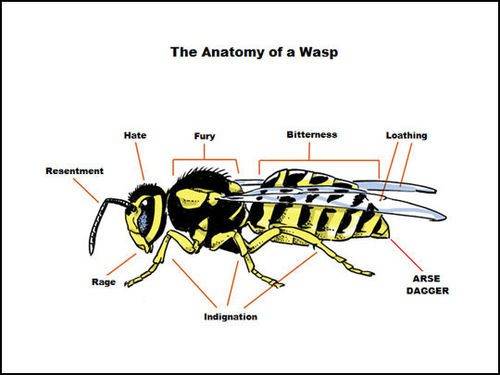 The Institute was also able to show that contrary to popular belief, wasps are no use in the garden or for any other purpose. As Ava summed up “well, when you can’t even go outside because the stripey-arsed, winged shitwankers are trying to eat you alive, what’s the use in that?”

Extensive tests also showed that wasps don’t wait to be threatened before stinging at all, and they all just want to watch the world burn.

“The nasty little monsters that they are,” said Ava.

Vegetable that looks like Prince Charles discovered on Rochdale allotment

Thousands gather in London to watch fireworks through their phones