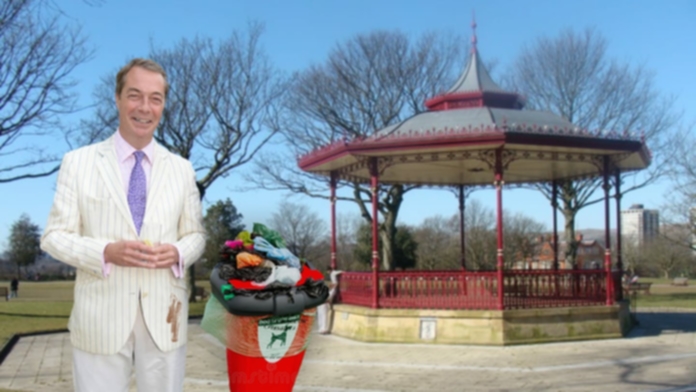 A new dog waste bin being installed in Mandale Park is to be named after Nigel Farage, according to plans allegedly leaked by a Rochdale council employee.

The ‘Nigel Farage Dog Waste Bin’ will be revealed in the New Year to commemorate the ex-UKIP leader’s contribution to Brexit. It is understood that a short unveiling ceremony will be held to coincide with Nick Clegg being knighted by the Queen. The bin, which will be painted yellow and purple, is to be fitted with an ashtray and pint-holder to celebrate Farage’s links to the ‘man on the street’, whilst a bronze number ‘7’ on the lid will honour the number of occasions on which he selflessly failed to be elected as a member of Parliament.

The move was apparently prompted by Israel’s plans to name a new train station after US President Donald Trump, following his decision to recognise Jerusalem as the country’s capital. Critics have suggested that it would be more appropriate to name a train crash after Trump instead, though how this would be implemented in practical terms remains unclear.

The council employee responsible for the leak, who has asked to remain anonymous, told the Herald that the new bin would be larger than previous models to accommodate a much greater volume of smouldering faeces.

“Nothing could more symbolic of Nigel Farage’s contribution to British politics than a cheap, gaudy, poorly-constructed plastic bin filled to the brim with dog shit,” he said.

Public reaction to the news has been mixed, with some people in favour of the gesture and others insulted by the implication that Farage is a bucketful of shite.

Keen Brexiteer and Farage enthusiast Darren Fudd, 36, vented his anger on Twitter, calling the council a “DISC RACE FULL BUNCH OF TRATORS” and demanding that “SIR NIGEL SHULD BE GIVEN A NITE HOOD FOR TAKING ARE CUNTRY BACK!!1!”.

“I can’t think of a better way to honour a man who took a massive dump on this country’s lawn and then ran away to hump the leg of the dirty old man across the road,” she said.

At press time, there are reports that Fudd has started an online petition demanding that the bin be used for the disposing of “white dog poo only, like we used to have in the good old days”.