Members of the public have reacted with OUTRAGE at the news that a new tattoo studio for babies and toddlers has opened in Rochdale town centre. 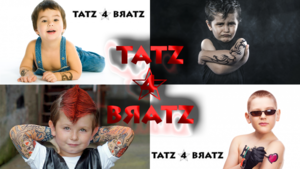 Tatz4Bratz founder Debbie Washford told reporters that she was simply responding to huge market demand for pre-school tattoos. She said “there’s nothing worse than being the odd one out. There is a huge amount of pressure on children and teenagers to fit in these days. We’re just making sure that they do.”

“I was getting asked all the time about tattoo designs for children so we decided to open a studio dedicated to just that. I really don’t see what all the fuss is about.”

The shop which is based on Tweedale Street in Rochdale has been exclusively tattooing children with innovative, award winning designs since early 2017.

“Children are under a great deal of pressure to conform to certain stereotypes and there are all kinds of issues to do with bullying that affect children who don’t fit in. If every other child has a tattoo and yours doesn’t then they might get bullied on social media. Kids can be really mean. You don’t want your children to be bullied do you?”

While some anti-bullying forums have welcomed news of the initiative to see more young children inked in Lancashire other Facebook groups such as “Mothers Against Tattooing Children” are taking a much firmer line.

“How are children as young as three years old supposed to choose a tattoo they’ll be happy with for the rest of their lives. They might be really into Paw Patrol or Go Jetters now, but what about when they’re a bit older. A seven year old with an In The Night Garden Sleeve tattoo is going to feel pretty ridiculous.”

The group is running a petition to have Tatz4Bratz raise the minimum age of their customers from three months old to five years old.

“The tattoo industry is completely unregulated and there are currently no laws whatsoever in place to prevent parents from choosing a tattoo for their children, which is outrageous.” A spokeswoman for Mothers Against Tattooing Children told us. Many ethnic minorities and religious groups including vegetarians, hipsters and non-smokers have been at the centre of the controversy.

“Nobody is saying that kids with sleeve tattoos don’t look cool, they look awesome. But they should have the right to make an informed decision about the design.”