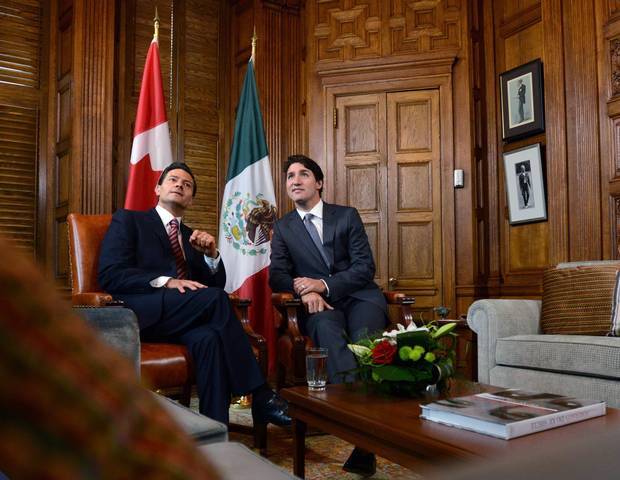 The governments of Canada and Mexico reached an historic agreement today to build 50 foot tall walls along their borders with the US on the proviso that the World Bank lends them the money for a lid.

Following the ascension of a gibbon faced lunatic to the US Presidency the Canadian and Mexican governments are taking steps to control emigration from the US and the spread of Type 2 diabetes.

“That guy is fucking mental.” Enrique Pena Nieto the President of Mexico told us. “You know he has nuclear weapons? It’s terrifying.”

“Just wait till Washington runs out of cocaine and they have to start picking their own fruit. They’ll be begging us for a gate.”

The Canadian Prime Minister Justin Trudeau was equally damning of the new administration.

“Well gosh and darn it if President Trump hasn’t gone and said and done some things recently. I might write him a strongly worded letter.”

The rest of the world seems to be broadly behind the CanadoMexican Super Duper Mega Roof plan to wall in and roof over the entire United States.

“America is off its rocker. We all agree that the best thing to do would be just to brick it up and leave it for four to eight years.” Dr Jim Yong Kim, Head of the World Bank told us.

“The problem with having a wall without a roof is that every American with a passport will just get on a plane and leave in the next four years.”

“Who’s going to deal with all of those refugees? Canada?” Asked Justin Trudeau. “Not likely!”